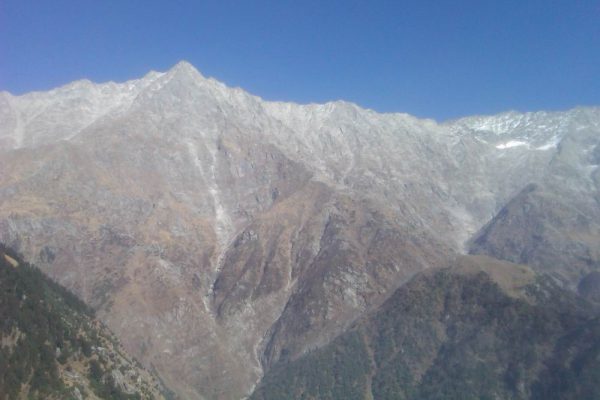 Triund Trek – Serenity in the Dhauladhars

Triund Trek – Serenity in the Dhauladhars

The trip to McLeod Ganj (McLG) was a leisure and relaxation trip and the last thing we expected (or wanted) to do was undertake a trek. But the biting cold (about 3-4 degrees Celsius at night) in the early days of December made us want to do “more” than just walk the three important streets in this quaint town four-five times a day.

There was nothing to buy (the wares sold at all roadside kiosks were very attractive but highly overpriced), the few recommended places to eat had been tried during the week-long trip and there was not much else to do (after we’d seen the temple of the Dalai Lama and walked to the next village called Bhagsu), so we thought, “ok….might as well trek…”

We were not looking for a 2-3 day trek, woken up as it is from our slumber at the virtual end of our trip. The owner of the hotel we stayed in, a very able, amicable and attractive gentleman from Kashmir, suggested that we trek up to Triund peak (pronounced by locals thus: Tri – as in trilogy; Und – as in under).

He told us that it was an eight hour trek (about 7 kms), and a little arduous, but we reckoned that we were in very good shape (having spent a large part of our incomes on gyms, personal trainers et al) and we’d be able to endure a 4 hour one way trek.

We began our journey at about 8 am by cab that took us from McLG to Dharamkot that is the base for the climb, located right next to the Galu Devi Temple. The journey took us about 30 minutes.

The trek path is well laid and we followed it right through the morning, as the Sun played hide-and-seek with us throughout the trek, prompting us to take off our thick jackets when it got harsh, or wear it again, as it hid behind a cloud cover or a mountain range.

The trek is picturesque and the only downside is the discomfiture of climbing over boulders every now and then.

Half way through the trek we stopped at a chai shop that claims to be the oldest in the region. The tea was delicious, made by a very meticulous Joginder Singh (who had the demeanour of an ex-army personnel) and renewed our energy for the next round of even more arduous climbing.

As we approached the last leg of our climb, we were famished (since we hadn’t carried anything to eat) and sort of tired too.

Its only when we reached the top of the Triund, that is very aptly called Triund Top, we were taken by surprise. The air was nippy, the Sun warm and the grass, green! Imagine if you will, lying flat on green grass, shielded from the Sun by a boulder, gazing at the bluest, cloudless sky…being at Triund Top was surreal. Surrounded by the Dhauladhars, that seemed so near and yet so far, this was as close to Heaven as one could experience.

And the silence! The silence seemed to speak to us; calming our souls, soothing exhausted limbs…

After we’d rested for about 20 mns, we got up to ask the chai walla what he had to offer. Apart from tea, biscuits, soft drinks and exorbitantly priced water, he had a dish perhaps the most popular with even the most finicky adults (out of homes and their comfort zones) – Maggi noodles!

We slurped down a version of onion Maggi with glasses of honey-lemon and ginger-lemon teas, gazing at the spectacular beauty of the Dhauladhar ranges wondering if we could stay in this near-paradise forever! Unfortunately, it was soon time to start our journey downwards, if we were to make it before sunset. But we were so deliriously satisfied just being there that we didn’t have the heart to leave. As the wind picked up and the Sun began its descent, we had to make our decision.

We asked the chai shop boys if there was a place we could stay the night in. And surprisingly, there is not one but two places to stay…i.e. if you don’t count some of the trekkers who’d come with camping gear and were in the process of setting up their tents.

The first place (supposed to be a government/forest guest house) closer to the trek path was very basic – the bathrooms were almost revolting, the rooms dreary and the caretaker didn’t seem very ‘confident’ about what he’d feed us. The second place was newer, but without a single operational bathroom. Yes! We did eventually, have to, give back to Nature what comes from Nature, blah blah…

But what clinched the deal for him was that the owner, Hansraj could guarantee us a home cooked meal, “Whatever we will eat, we’ll give you…” he said.

He also had fresh sheets and plenty of fresh blankets to cosy up in. At 9200 ft, without electricity, the blankets would be our only source of warmth in the biting winter cold.

And, he also had three very naughty dogs, who kept us company through the evening (including smelling our butts as we ‘did our jobs’), as we lit a small bonfire and sat in front of it, singing songs and getting drunk on rum…that the owner generously shared with us. (On second thoughts, the rum was probably the deal clincher!)

Before we could utter “Oh” the Sun had set casting a beautiful golden hue all over the Dhauladhar ranges. After our ‘almost camping’ experience, we gobbled the meal of a mixed curry with chapatis he had whipped up in candlelight and knocked off to sleep in an instant.

The dawn was as beautiful as could be described by a poet but it was extremely cold. After a cup of tea we set forth on the journey downwards. The climb down was much faster and as is typical of the end of a trek we couldn’t wait to get to McLG, hot water, warm food and the comfort of our room.

How to get to McLeodGanj

From Delhi to Pathankot onwards to Dharamsala. McLG is just 10 kms from Dharamsala.

Delhi to Pathankot – Plenty of trains and state transport buses available. It is an overnight journey.

Pathankot to Dharamsala – 90 kms – Taxis or State transport buses. The latter is better and more economical. The journey takes about 3 hours. The buses from Pathankot will also take you directly to McLG.

Things to carry on the trek

Water and a packed meal would be great. Ideally you would be advised to begin the trek in the morning because getting down the steep climb is very risky after natural light fails. So do carry an omlette sandwich for breakfast and perhaps a couple of stuffed parathas for lunch. Tea will be available at the mid-point and the top.

Since the goods available on the top are ferried by humans from Dharamkot and McLG they are exorbitantly priced so if you are the snacking type, do carry adequate munchies along.

We are not certain if promoting stay at the top in one of the private guesthouses is a good idea. However the person who owned the place we stayed in is Hansraj and his mobile number is +91-9805 910499. When we spoke to him in June 2012 he said he’s leased the guest house to a relative, Jeevan who is available on +91- 9736 360848. Jeevan also owns a place behind Bhagsunag Temple in Bhagsu called ‘Perfect Heaven’. Jeevan has requested that guests should book the place well in advance to avoid disappointment. He also clarified that the bathrooms are now operational 😀

According to avid trekkers, an hour and a half climb from Triund will take you to the snowline Illaqa. Most trekkers from the region head to Illaqa. Our next trip to McLG will certainly include the trek to Illaqa. Keep watching this blog for updates.

We went in early December and the weather was cold, though it hadn’t begun snowing yet. We have been told that the trek is even better when it snows! The month of May would be a great time to visit, although the Summer rush would be a tad annoying.

There is no electricity on the top, (therefore, no televisions) so do ensure your camera batteries and cell phones are charged to the max before you begin the climb. Jeevan also informed us that the Top is out of the range of all mobile operators (which is great if you’re seeking absolute solitude). So, you’d be wondering why we’re asking you to ensure mobile phones are fully charged? Because you’ll need them to make your call to the cab driver at Dharamkot for your return trip to McLG or Bhagsu, wherever you’re staying. The network gets better closer to Dharamkot.

The climb is arduous but getting down even tougher. Somewhere during the trek you will find a plaque on a boulder pointing to the exact spot where an avid Pune-based trekker Parag Sahasrabuddhe lost his life in a freak accident. It may begin to play on your mind especially if you are first time climber, but be rest assured, a little care goes a long way in ensuring a safe trek. 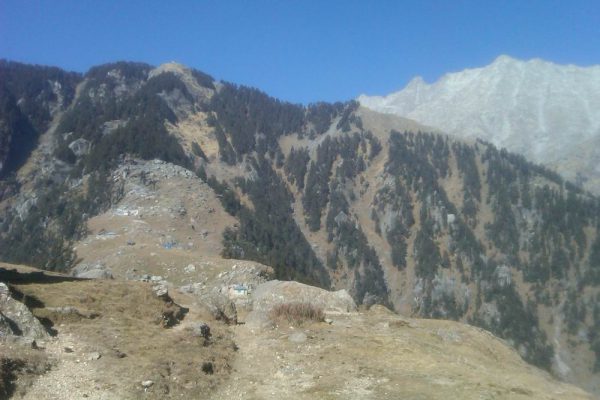 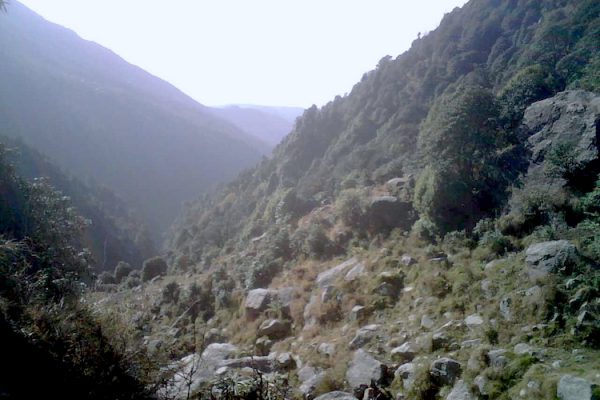 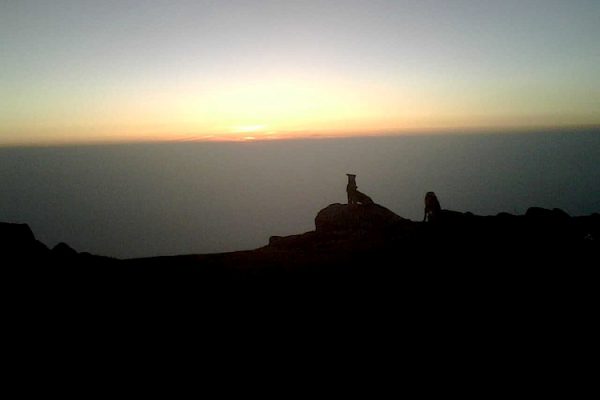 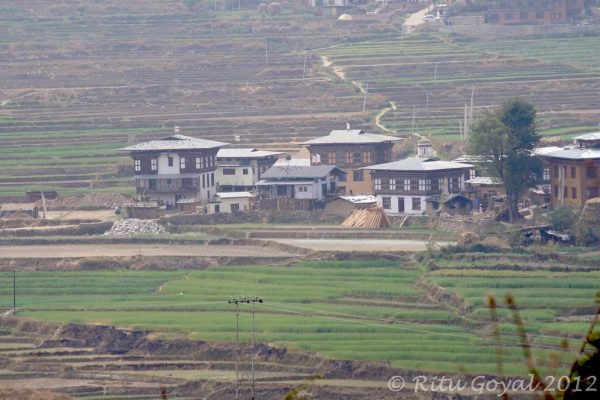 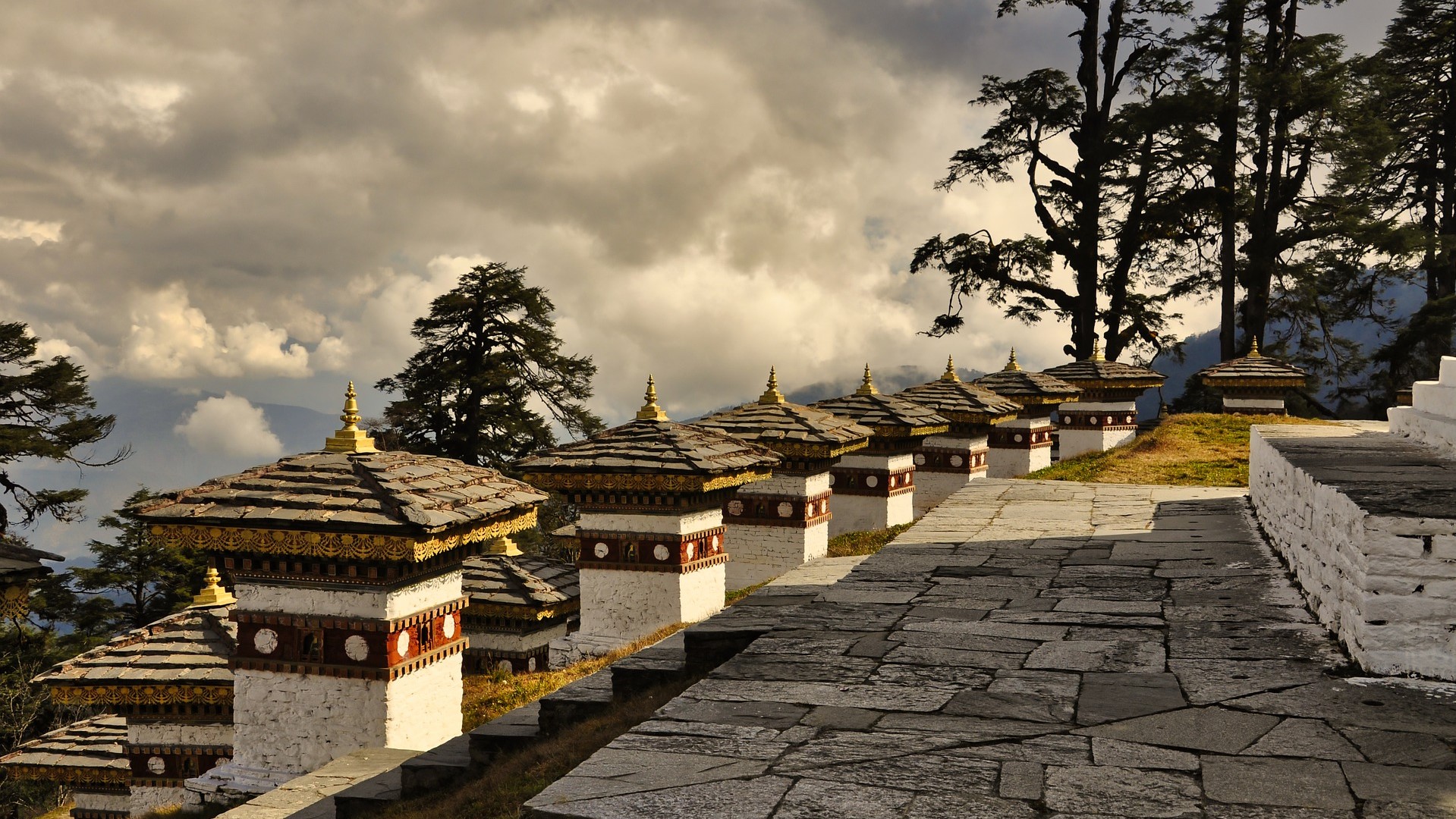