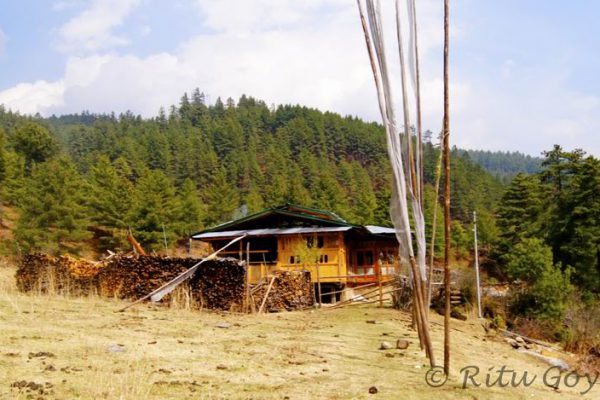 While Bumthang is famous as the religious and cultural heartland of Bhutan and there are several small and mild hikes that take you to monasteries, we wanted to go off the beaten track to try something new.

Pema Dawa the owner of our cosy hotel understood our lunacy for exploration and discovery and gave us directions for a lesser-known trail that would take us through the heart of the forest around Chummey.

John dropped us off at the chorten at Yotong-la and drove down to meet us at the village where the path Dawa said would open up – Jhoori (pronounced z-h-oo-ri) village.

It was a cold and windy day. The intermittent drizzle did not deter us as we set forth through a passage surrounded by prayer flags, at the top of the range. The trail went downhill for most parts through a dense conifer forest.

The starkness and mystery of a forest that we often view from a distance opened up before us as we walked on a winding path snaking its way through the high ranges. The path was a single trail and not treacherous at all. At some points on the trail, the wind was very strong indicating that we were at a considerable height on the mountain.

The mountain trail (called ‘pagdandi’ in Hindi) was quite clear throughout the two-hour walk but there were at least two points where two distinct paths seemed to emerge. We stood there for a few minutes a tad confused. We didn’t fear getting lost, because in Bhutan, it wouldn’t matter even if you did; the country is absolutely safe even for single women travellers. We didn’t fear animals because Pema Dawa had told us that there are no wild animals on this route. And we didn’t fear reaching a dead end because in the eventuality we could simply re-trace our steps back to the chorten and call John to pick us up from the starting point!

We utilised our innate sense of direction, took a deep breath and followed our instinct. Both times we were rewarded suitably as our choices were right.

Most of all, from parts of the trail we could see a road in the distance, and almost throughout the trail we walked alongside electricity lines. We knew that civilisation was not very far away and that gave us some solace in the eerie peace and quiet of the walk.

We approached this house with a fair bit of trepidation. We did not want to be seen as trespassing on a private property and knew that we would find it impossible to converse with anyone who didn’t speak or understand English. Our fears were put to rest as a beautiful young woman opened a window and asked us what we were looking for (or so we assume since she could not speak English and we speak no Bhutanese!)

Soon her mother came out and we said “Jhoori” and she asked, “Jhoori?” leading us down a path towards a road that looked like some sort of a highway. (We later found that the road goes from Jakar to Ura). By this time we had mobile network connectivity and called John.

John (Who is John? Read about him HERE) informed us that we were on track and the village we had reached is called Phogo. Jhoori was located across a bridge and was the village we saw from the range before we began our descent.

While we were traversing the Penthangsay Trail John had managed to coax a young woman from the village to serve us the local brew Ara and Bangchang with some home cooked Bhutanese fare. Choki cooked us an amazing hot meal (downed with liberal quantities of the brews) as the weather changed for the worse.

If you’d like to explore the trail, do watch this short 2-minute video we shot. To break the monotony of the (almost spooky) silence of the trail (disordered only by the sound of foliage assaulted under our quick moving feet) we’ve included a soundtrack of a traditional Bhutanese song we found on the Bhutan Broadcasting Service website. The song is called Ama Leyngyen Chengi Butsha Nga and is sung by Lobzang Tshering. 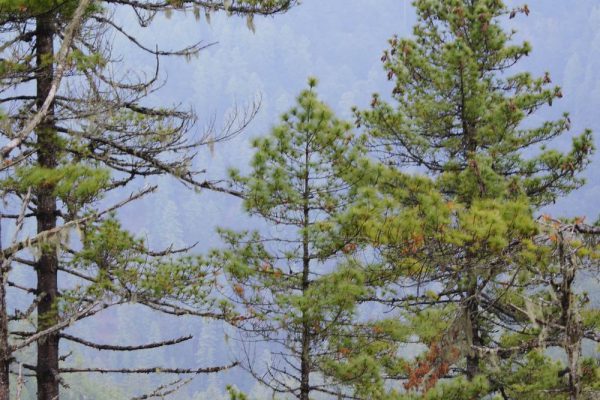 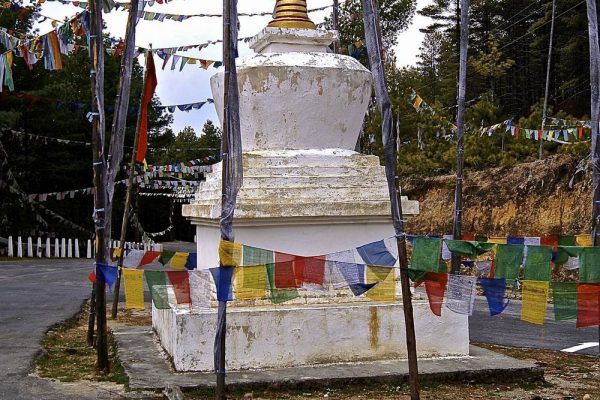 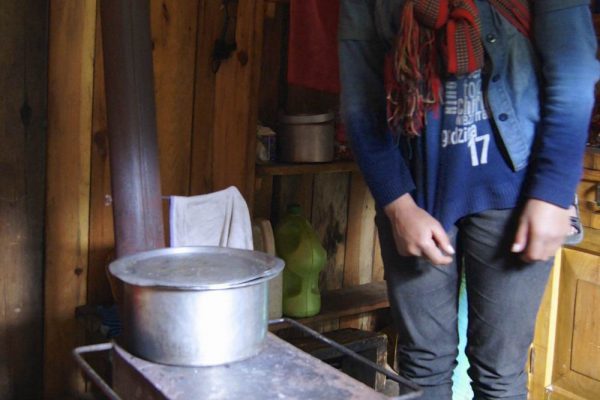 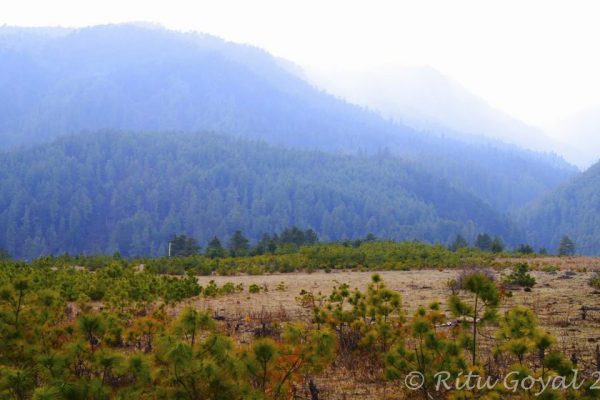 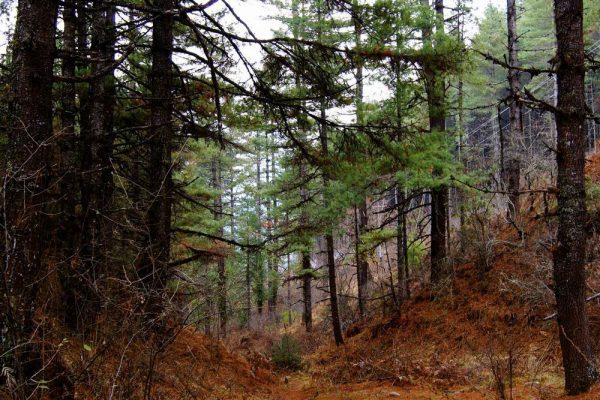 Disembark from your vehicle at the chorten before Yotong-la pass. This would be about 10 kms from Jakar town center towards Chummey.

On the left side of the chorten you will see many prayer flags and a clear path that leads downwards. That is the beginning of the Penthangsay Trail.

This is a very short and mild trail. However we suggest that you carry a bottle of water and a nutri-bar or handful peanuts to keep the energy going.

Contrary to whatever the weather may be at Jakar town, be sure to dress warmly. A woolen cap and thick jacket are a must. Do wear full-length tracks or jeans and full sleeved shirts because thorny shrubs will block your path often and you will have to brush past them.

Choki lives right next to a famous sawmill at the village. She runs a little store from her modest house. You may need an interpreter to convince her to whip up an appetising meal for you, but if you manage it, you won’t regret it.

Do write in to us with your own Bhutan experience. We would love to compare notes on this charming nation! 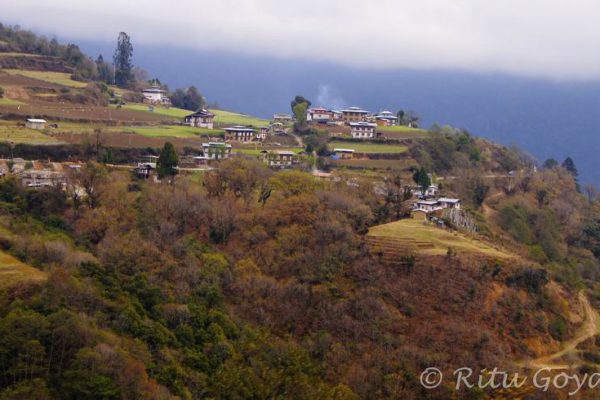 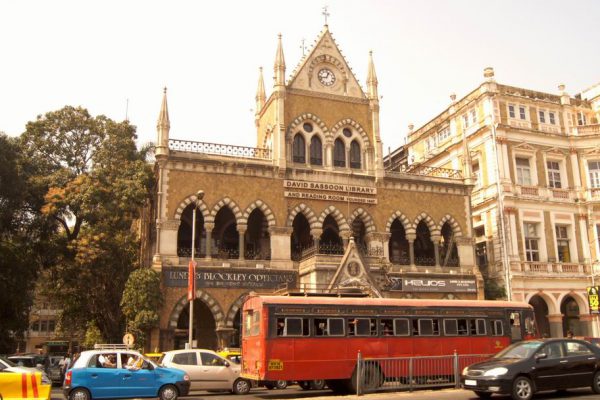